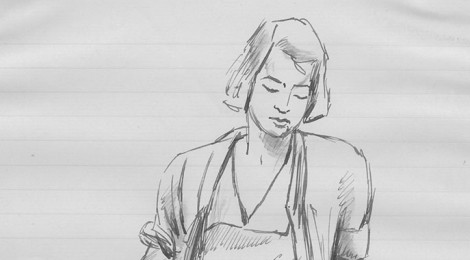 Constance Howard professionalised the teaching of textiles and embroidery in English art schools in the post-war period, especially in her work at Goldsmiths, however before this period she studied and taught at Kingston School of Art, marrying the sculptor and fellow tutor Harold Wilson Parker.

In her book, Twentieth-Century Embroidery in Great Britain 1940-1963 (Batsford, London, 1983) Howard gives a fascinating account of the war years at Kingston. She relates:

“I was in charge of the dress and millinery department at the Kingston-upon-Thames School of Art during the war years. The School remained open for full-time and part-time students. With the shortage of materials and rationing of most commodities, ingenuity was shown by both the staff and the students in conserving what stocks of materials we had and in using them with care. We could not cut into our few good pieces of cloth, so students took turns to drape fabrics on stands to explore ideas, after which they developed their designs on paper, adding imaginative features such as patterns of embroidery to their drawings. Salvaged materials were bought at very low prices, pure silk taffeta was as little as 1/6 per yard and linen 1/- per yard. Make-do-and-mend classes flourished, old garments were refurbished and decorated with embroidery.”

Howard recalls how Kingston’s links with aviation resulted in convalescing Canadian airmen attending classes as part of their rehabilitation:

“The men mixed with the full-time, young students, making their own patterns and embroidering mittens, caps and bonnets, as well as making dolls, for their families at home.”

Howard also recounts the embroidered maps that staff and students at Kingston made for the RAF as part of the art school’s war work:

“This we did during the vacations, working on a very tough, waterproof fabric that gave us sore hands from the effort of pushing the needles through the close weave. We worked wooded areas in French knots, placed solidly together, in tapestry wools and others of a similar weight in several shades of green on an olive green background. Stitches were worked over one another to give a slightly raised effect to some of the hills, stem stitch separating the fields and roads. These maps were, apparently, more accurate than photographs in depicting relief because of the raised stitches.”