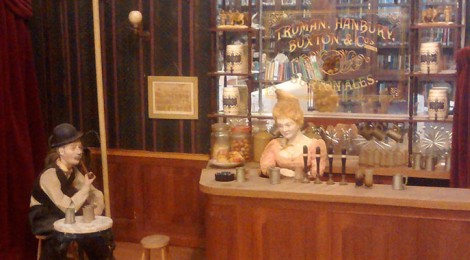 Howard Karslake (1932-1995) was a model maker for the London County Council Architect’s department when he enrolled as a part time student at Kingston School of Art in September 1949. In total he spent a year studying at the art school, leaving the following July. He had originally taken up model making whilst in the Royal Air Force, working as an undercover topographer making detailed scale models from maps that pilots could study before flying missions. 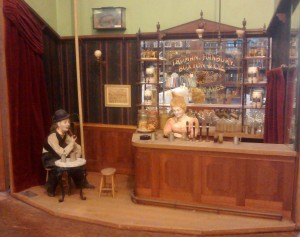 In his later career he was an independent model maker for projects such as the Thames barrier, Concorde and North Sea oil rigs such as Piper Alpha. The models depicted here are on display at Bishopsgate Library and were commissioned in 1972 by Truman’s Brewery, for The Bell pub in Spitalfields – depicted in its turn of the century splendour in this model above. The barmaid was made in the likeness of, and used hair from, Karslake’s own wife. More information about the restoration and history of the models can be found at the excellent Spitalfields Life blog below.

Thanks to Stefan Dickers at Bishopsgate Library

← Rosemary Barnett, sculptor
All Aboard for Kingston School of Art! →